In November 2019 TourRadar hosted its second Black Friday Sale offering special deals on multi-day travel tours for its core markets. Over 7 days users could choose from around 3,000 travel deals worldwide from hundreds of well-known operators.

In my role as lead designer it was my responsibility to come up with different concept designs, carry out user testing and ensure the output from the marketing team would be consistent across all communication channels.

The brief was to incorporate any elements that may relate to Black Friday and Cyber Monday, such as the colour black along with any graphical elements, as well as the highest discount on our multi-day tours. 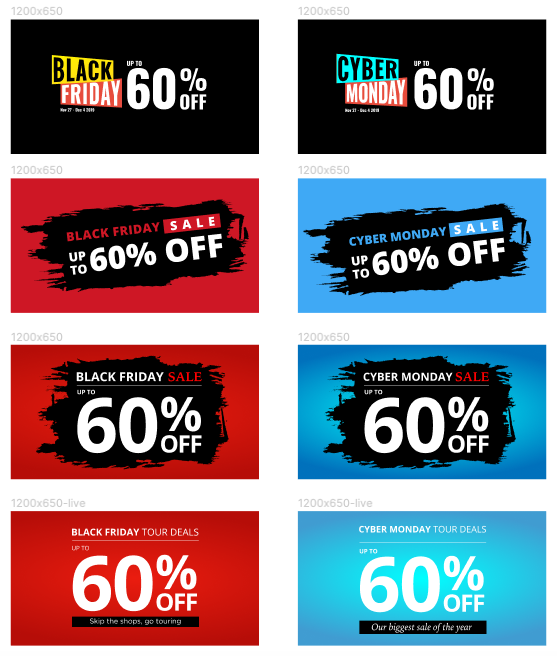 During the user testing phase we carried out a number of preference tests online with 100 users reflecting our target audience. The purpose of the test was to test the appeal and clearness of the creatives that should be used throughout the campaign. 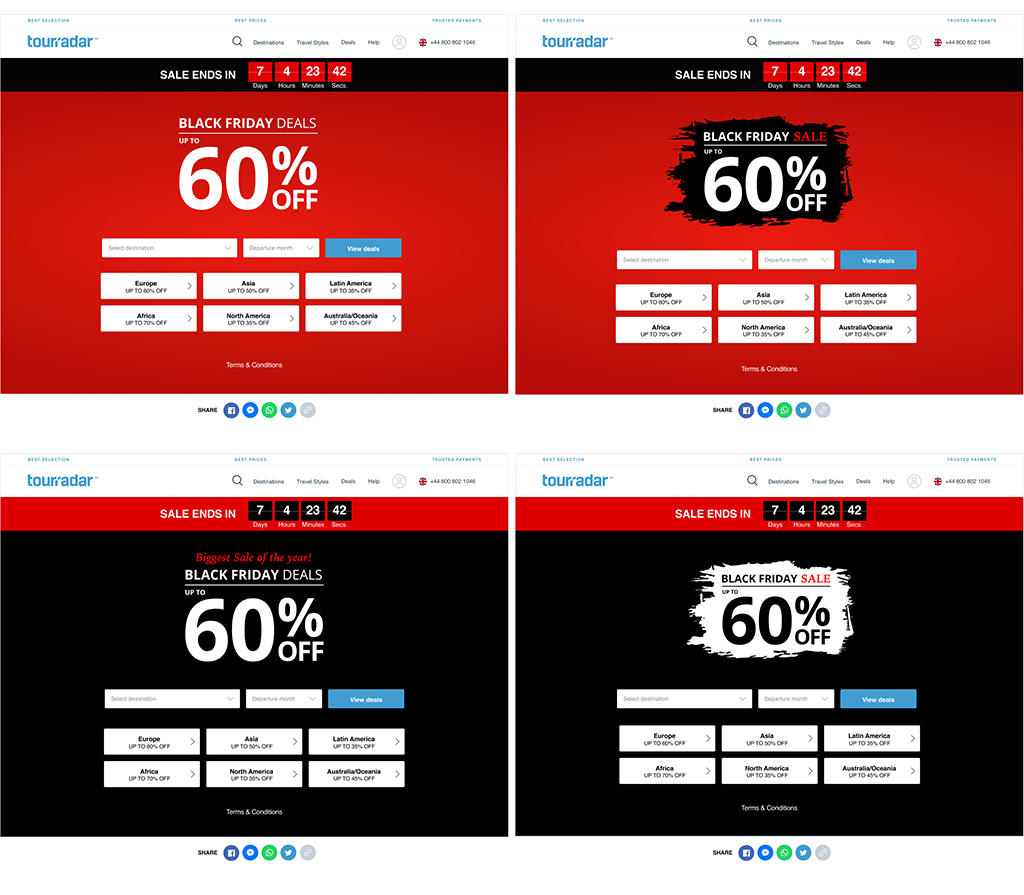 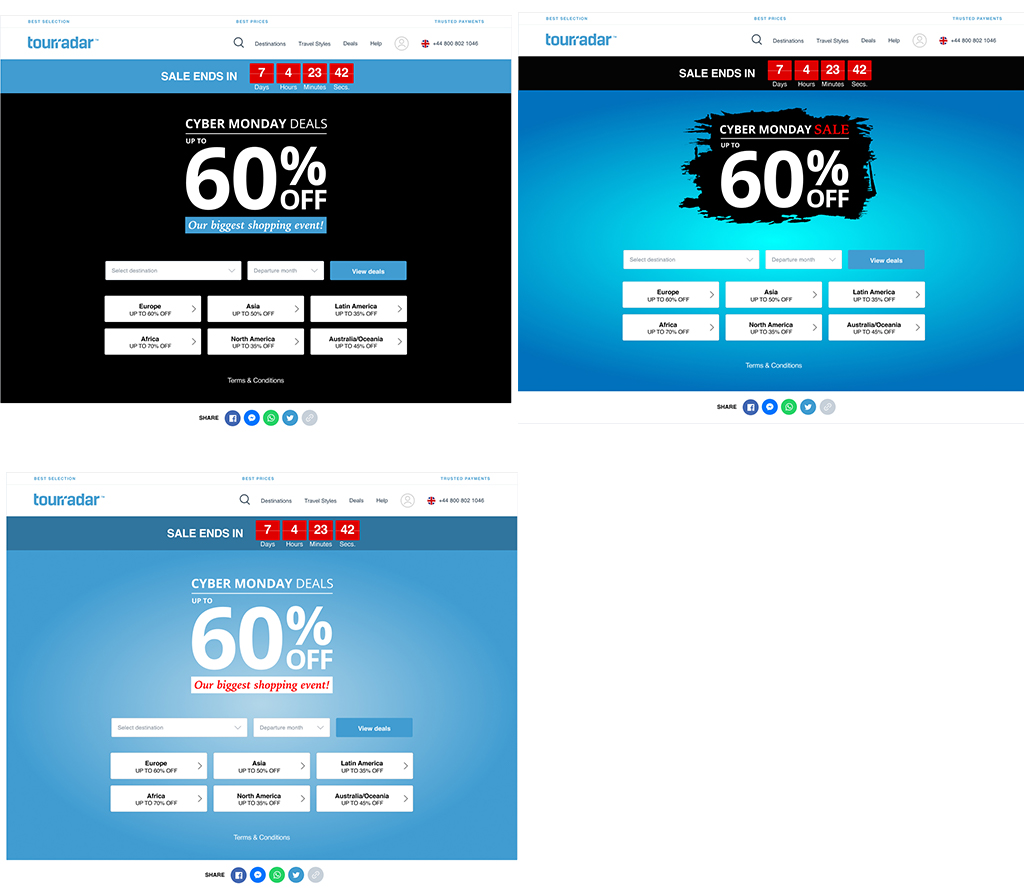 Resulting from the user test, we had a clear winner: It was the red/blue version without any graphical element, using the wording “Black Friday deals”. The feedback we received was that the vibrant red/blue colours are more prominen in comparison to black and the messaging was clearer without a brush stroke.

To ensure the output was aligned across all our communication channels we set up a cloud-based libraries including colour scheme, fonts and UI elements on Figma for the design team as well as a style guide as a PDF for all non-designers.

During the awareness phase we communicated to new as well as existing users about our upcoming sale and asked them to sign-up to be able to access them early. Consequently, they would receive regular email updates about the sale and be signed up to the TourRadar newsletter. 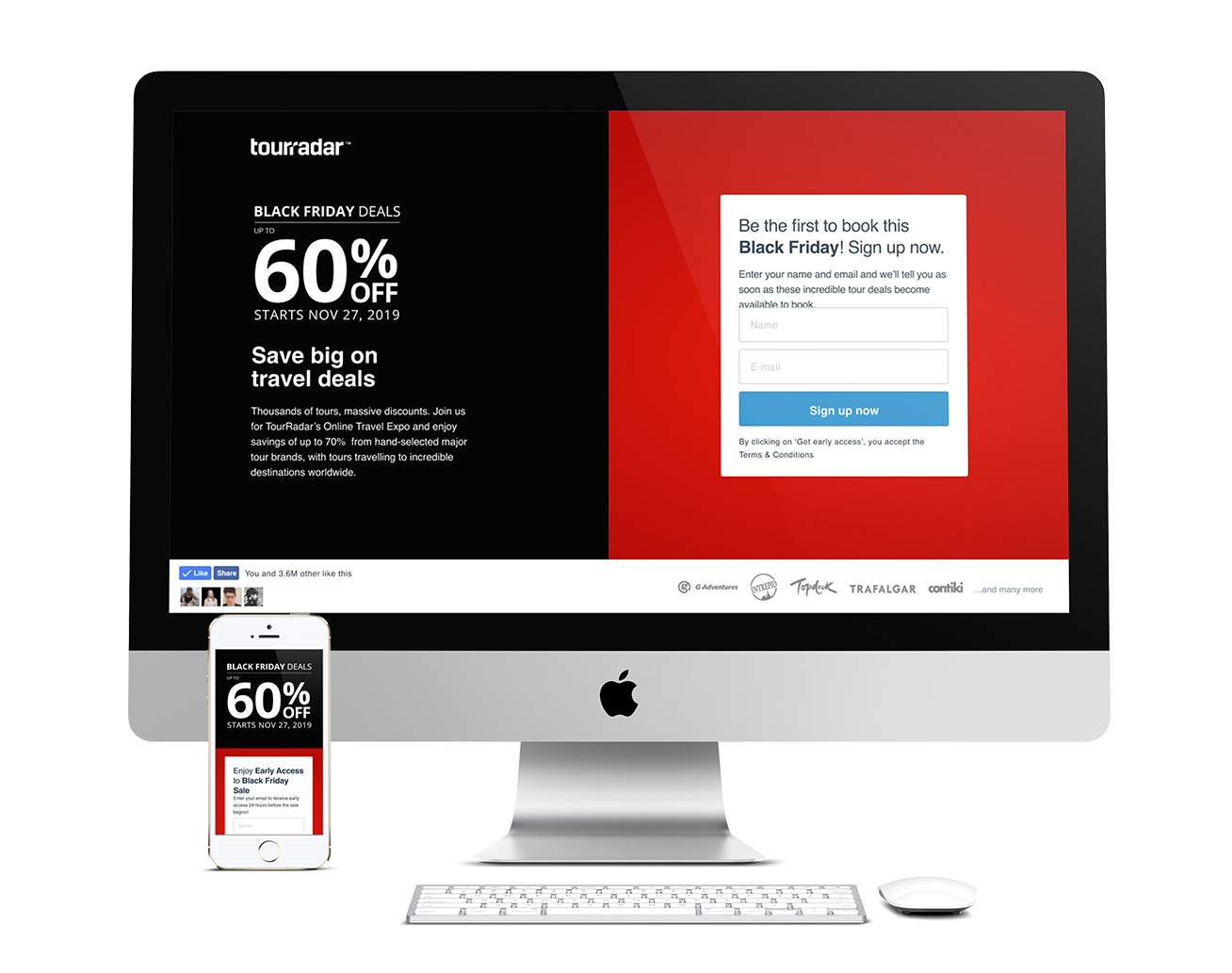 In the live phase we launched a dedicated Black Friday landing page which let users search for the tour deals by continent or country. We also promoted the operators with the highest sale discount. 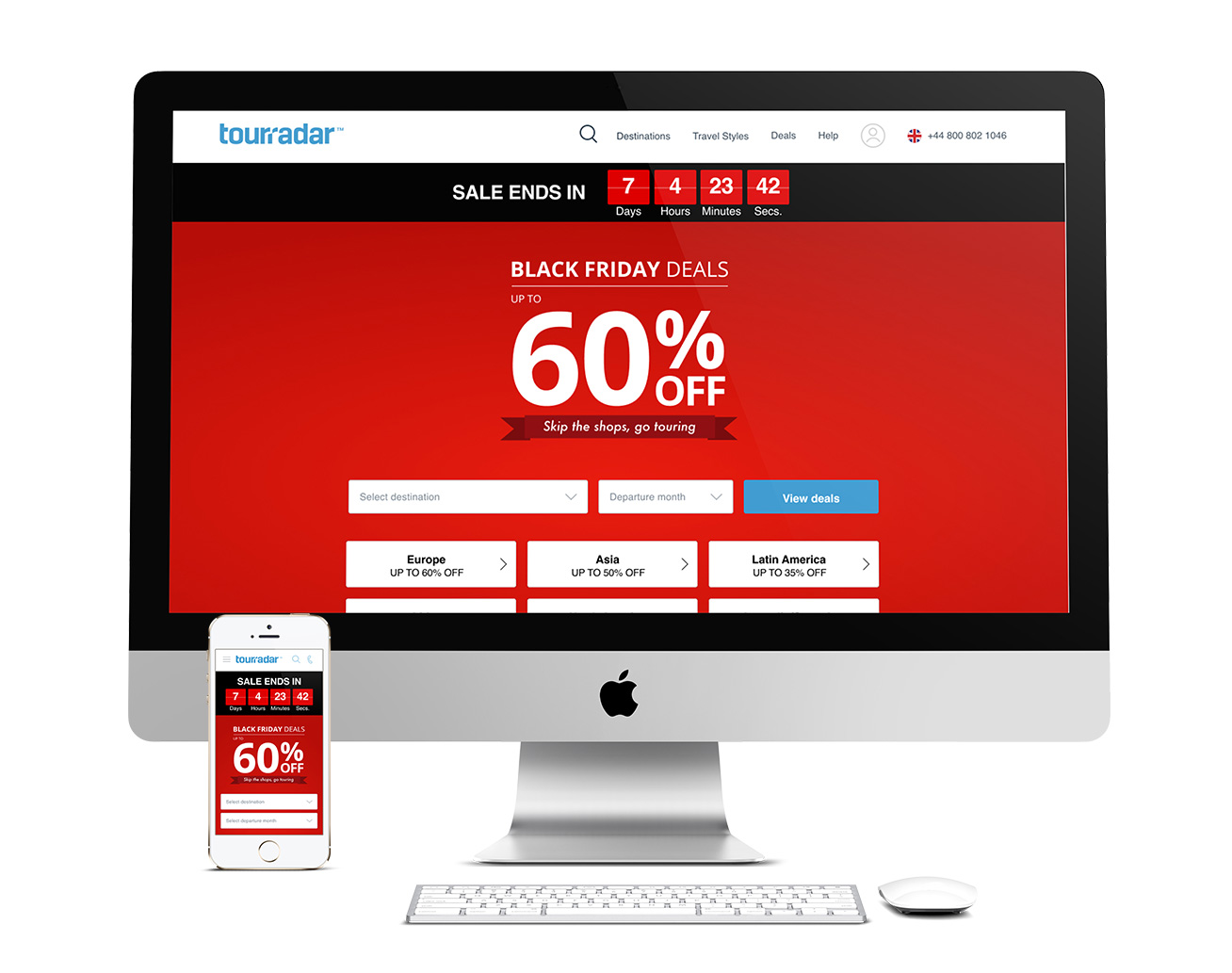 The last day of the sale coincided with Cyber Monday, therefore we updated the wording of the Sale and changed the colour scheme from red to blue. 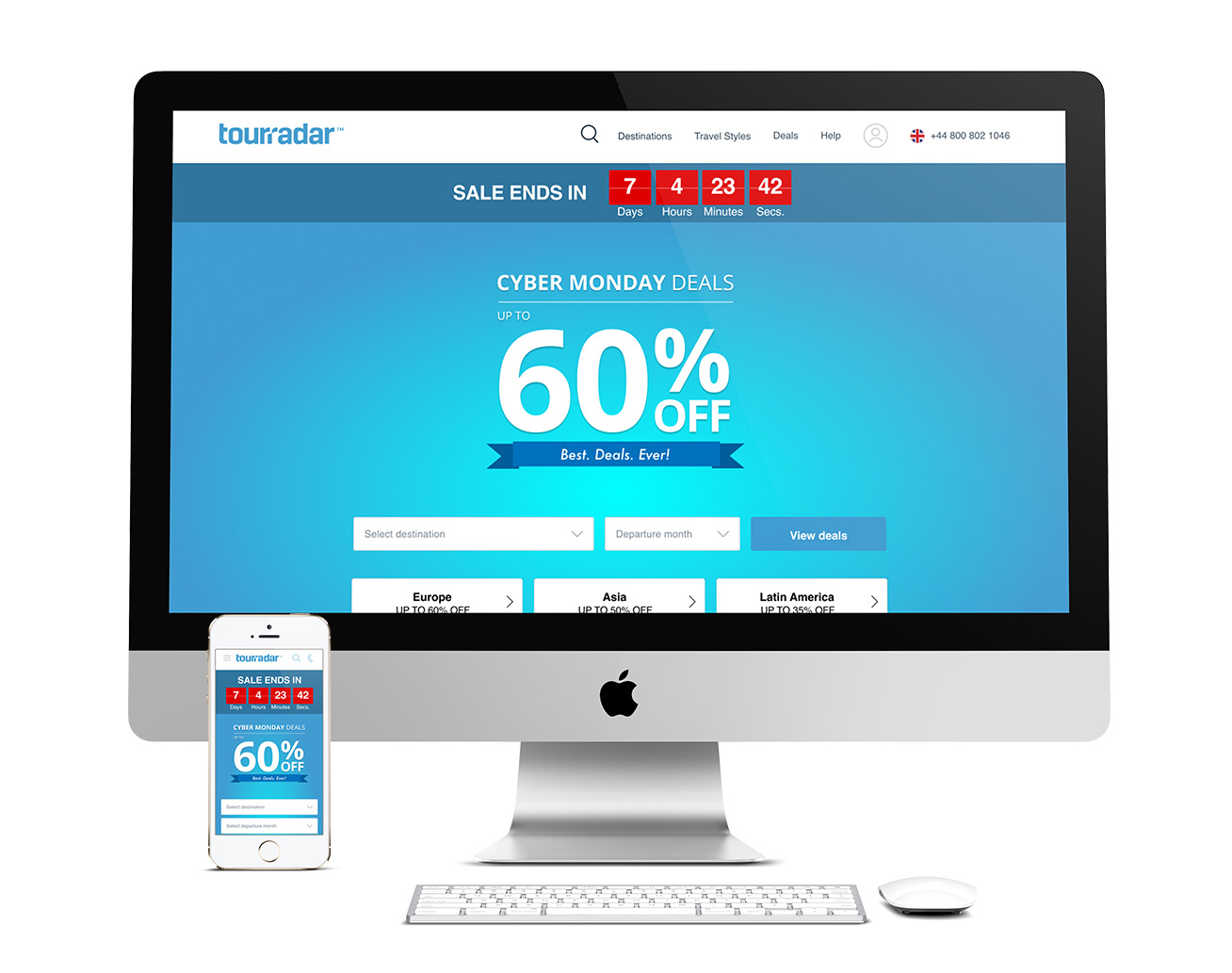 Here is some of the campaign output the design team has produced to promote the sale: 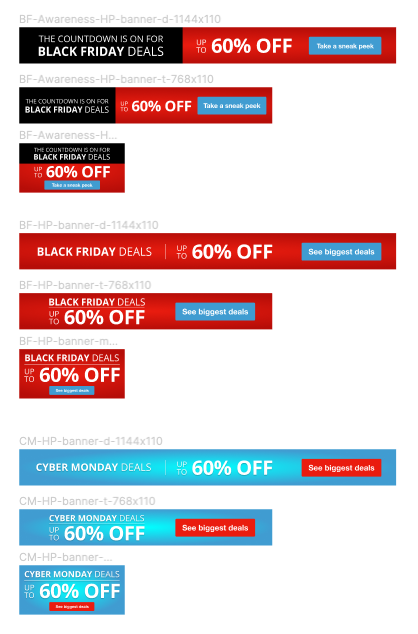 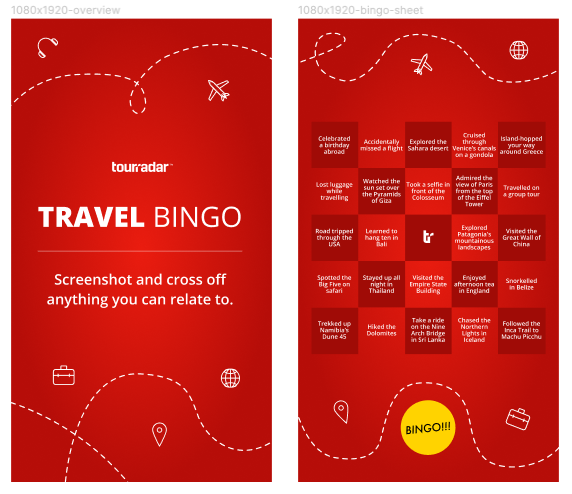 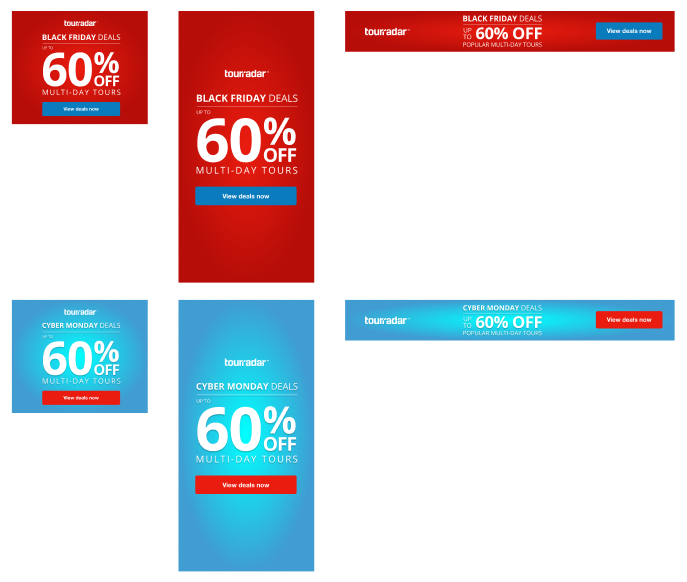 The Black Friday/Cyber Monday campaign was one of the most successful campaigns of the year. During the campaigns we hit and surpassed out targets: